Even 2020, if you work seriously and plan ahead, can give great satisfaction. As “the recognition of maximum commercial reliability”, a certificate awarded to Sun Ballast by CRIBIS D&B, a leading company in the field of business information.

Let’s start with the happy ending

Although we are still in the Christmas atmosphere, what I want to tell is not a fairy tale, but a story of ordinary and extraordinary Italian entrepreneurship that shines with hope and goodwill.

Since I have already spoiled the final, it is worth starting from the present day, precisely from 29 December, when Isabella Nart, Head of Administration Basic srl Sun Ballast receives from Cribis D&B a communication that attests “the recognition of maximum commercial reliability”.

The surprise is directly proportional to joy: Cribis D&B, a company of the CRIF group, is in fact an organization that operates on a global scale in the field of business information and that collects reports on over 200 million companies in over 230 countries.

The “Cribis Prime Company” certificate is based on “Cribis D&B Rating”: a dynamic and constantly updated indicator on the reliability of the considered company.

It measures the probability that the company will generate unpaid, based on some indicators such as: balance sheet indices, payment experience in both give and take, negative information, personal data and legal form, company size and structure, geographical area and more.

Each year the recognition of “Cribis Prime Company” is awarded to only 7% of the 6 million Italian companies.

This means that we are among the top 420 thousand companies for financial reliability in Italy: a fantastic result that for me and for all the historic staff of Sun Ballast is also something more. The arrival point of a path made of difficult decisions, and a reward for so many risks and sacrifices, two words often abused but that for an Italian entrepreneur of the 2000s are living matter, bread and butter.

To explain better, I start from the beginning. 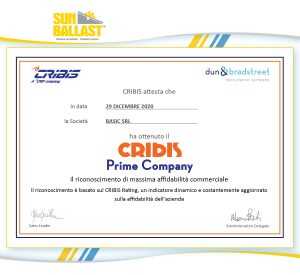 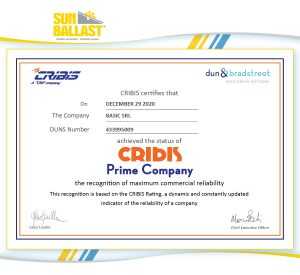 When it all started

I graduated in 2000 as an Electrical Engineer, then there were nine months of civil service and two more of apprenticeship at an electrical plant company.

In 2005, when I was 23, I took my retirement pay and used it to buy a used truck, a toolbox and a ladder, thus turning the woodshed behind the house into an improvised warehouse.

That’s how I ended up with my first VAT number.

Initially I did small electrical works, mostly for third parties, like many craftsmen in our sector. In 2008 I had the fortune to be involved in one of the very first photovoltaic plants in the province of Reggio Emilia (Italy). In the meantime I already had a team of 5 operators, and I immediately realized that the experience accumulated as a boy in construction sites gave me a big advantage over the “classical electricians”. Because 70% of the installation work of a photovoltaic system consists, in fact, in the assembly of structure and modules. And I knew something about tiles, joists, sheaths, etc…

This advantage allowed me to ride the wave of the first energy accounts in Italy, until putting together a team of more than 20 operators.

We installed thousands of plants, I never worked less than 14/16 hours a day. Until 2012 everything went quite well, I began to structure the company: vans, equipment, warehouse, etc..

But with the cut of the incentives the problems began: some companies could not cope with their debts and a chain of unpaid that hit us in full. Within two months I found myself with more than 240 thousand euros of unpaid invoices from debtors who would soon disappear.

I was 30 years old, had a wife and two small daughters to support, with banks asking me to come back. And the consultant who used to say, “Close up early”. It was without doubt the saddest but most formative period of my life.

At that moment I made a decision: I would never work with the Bank’s money again, I would never put my company, my employees, my suppliers and my family at risk again.

In the meantime I started making the first prototypes of Sun Ballast: the emergency situation served to add the right pressure. You say “of necessity virtue,” and it really is, I know for sure.

On the one hand, with my collaborators and founders of the project Di Tella and Nodari, I dedicated myself to make known, distribute and improve Sun Ballast, on the other with my wife Marianela, at that time head of Administration, we put down a meticulous return plan. I can say with pride and with my head held high, that in the end we were able to pay all the suppliers and employees, all the taxes, and to fully re-enter from banking.

To be precise, in 2015 we had restored a complete corporate solvency.

At that point a strategy was put in place, more precisely a financial planning, which provided, in addition to the provision of funds needed for known future expenses – such as land purchase, equipment, research and development, etc. – some items which served as a buffer for any emergency situation, under the heading “untouchable reserves and provisions”.

In these seven years of activity we have done a great job, at the beginning with a good amount of effort and sacrifice, but always, I emphasize, with a smile and the spirit of the Group.

For this reason “the recognition of maximum commercial reliability” I feel it is more important than any attestation that could reach us.

Because it is the evident and tangible result of the efforts and sacrifices made by me, by my wife and by the first collaborators and founders of the project, together with all those who have joined over the years, to form the beautiful family Sun Ballast.

We managed to make the impossible possible, thank you very much to everyone.