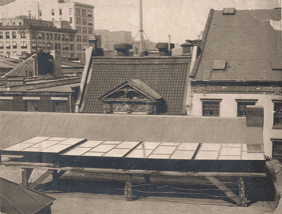 Home Insights
Photovoltaics: An ancient history with a lot of future ahead

Photovoltaics: An ancient history with a lot of future ahead

Like all solid and long-lasting sectors, photovoltaics also has a long history of discoveries, inventions and constant progress behind it. The term “photovoltaic” was born in 1839, when the French physicist Alexandre Edmond Becquerel discovered that some metal elements exposed to the sun generated a small current flow, which he called the “photovoltaic effect”.

This is the milestone that would trace technological progress in the years to come. In the mid-1800s some British researchers discovered the effect of sunlight on selenium, which when illuminated emits a slight discharge of energy.

It was that in 1883 the American Charles Fritts created the first photovoltaic panel, consisting of a layer of selenium, which is a semiconductor. It covered with a very thin layer of gold, increased its electrical conversion efficiency, producing a current “which is continuous, constant and of considerable strength”.

This cell had an energy conversion rate of 1-2%, very low if you consider that today most of the modern solar cells work with an efficiency of 15-20%.

In 1921, none other than Albert Einstein, Nobel laureate in physics, carried out research on the
Photoelectric Effect, which is the phenomenon of generating electricity through photovoltaic cells.
In 1955 the first silicon solar cell was patented, the result of the work of scientists Pearson, Chapin and Fuller. The results were surprising, but the costs were still too high to allow for large-scale use.
In 1958, Vanguard I, the first orbiting vehicle powered by photovoltaic modules, was launched in the space, but it was in the 1960s and early 1970s that photovoltaics began to find space in niche markets.
In the 1970s, with the oil crisis resulting in the intensification of the search for new alternative energy sources, the world of photovoltaics began to become real and attractive.
1970, in Italy, is a historic year: the first photovoltaic system in Italy is installed in the Cesenate Apennines, at the Mandriola pass: the power was 1 kw.
It was in the 1990s and 2000s that the photovoltaic market experienced an astonishing growth, up to 400%.

Industrialization and research allow for a significant reduction in production costs and an improvement in both the efficiency and reliability of the photovoltaic modules.
Thanks to various incentive systems and probably also to a strong sensitivity on environmental issues, Italy is one of the main players on the world stage for what concerns the installation of photovoltaic systems.

In the last decade, from 2008 to today, we have witnessed a continuous expansion of photovoltaics, which has also become familiar to the common man and not just to professionals. It is now normal to take a walk in the city and see photovoltaic modules installed on houses, warehouses, canopies and facades.
History therefore teaches us that photovoltaics is by nature a technological sector that lives and feeds on innovation and change.
It is a continuous race to the cell with the best performance, with more robust modules, better welds, more efficient inverters, safer structures and easier to assemble.

And then again storage systems, energy distribution through energy communities: always ahead, with all that human ingenuity will be able to achieve.
Because innovating means taking risks, having the courage to do new things when the whole world says “It can’t be done”.
Innovating means finding the strength to collect the pieces of a failure and try again and again, until dreams become reality.

The man of the future must be grateful to all those governments, companies and people who over the years have dedicated the time of their lives to the hope of giving even one more day to our planet.

fill in the form